Kanchipuram may be the birthplace of ‘Arignar’ Anna, the founder of the DMK.

And for MK Stalin, son of DMK president M Karunanidhi, it must be easy to draw voters’ support for the party in the Tamil Nadu Assembly Elections scheduled for May 16.

Not necessarily, say, local party representatives and residents. The DMK and its arch-rival, ruling party AIADMK, the ruling party, are the main contenders.

Sure, there is some dissatisfaction with the incumbent government, which will benefit the DMK. But the Opposition is split in a five-cornered contest in Tamil Nadu, along party lines and communal lines.

It could be tough to predict, particularly with the Pattali Makkal Katchi (PMK) likely the third major player in the fray, drawing away votes along communal lines, they say Mexico.

There are nine Assembly constituencies in the district, and all are in Opposition hands. But Stalin is putting up a game fight. He starts his campaign trail in the Kanchipuram district from Melmaruvathur, about 80 km from Chennai.

The busy traffic intersection just off NH 45 starts getting crowded as DMK supporters gather from about 3 pm. Traffic starts backing up. Party songs start blaring from loudspeakers, and Stalin’s convoy edges slowly through the crowd around 4 pm.

It is still hot with the summer sun blazing down. Dressed in a dark blue-and-red checked shirt, Stalin takes up the mike and addresses the gathering from the top of his van.

He introduces the two DMK candidates contesting from Cheyyur and Madurantkam reserved constituencies — RT Arasu and Pugazhendi. Then, he catches the crowd off guard for a minute when he starts with the need to plant more trees to stave off global warming. 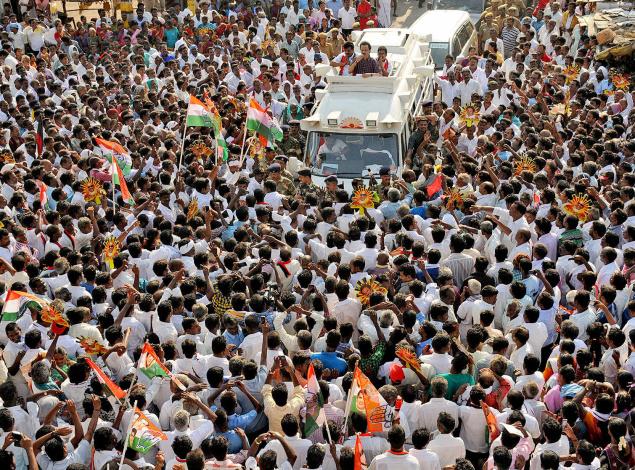 The next minute he is on familiar ground. The AIADMK has vastly exaggerated its schemes on planting 2.62 crore trees in the last five years and claims to have spent ₹175 crores, he says sceptically.

Stalin alleges that there have been irregularities even in tree planting. The crowd applauds.

During the course of the 20-minute speech, he actively engages the gathering, asking questions about the schemes in the DMK manifesto.

If there is a pause in response, he answers and points out that it must be difficult to pick out one or two points from the 501 schemes listed in the manifesto.

Vote for the DMK and its allies, including the Congress; if all these promises are to be implemented for the benefit of the State, he exhorts.

Talking about Cheyyur, he recalls the 4,000 MW power project planned by the DMK government but delayed by the present AIADMK government. Where is the desalination project they promised to obtain drinking water from seawater, he asks?

The convoy then zips away to Madurantakam. The routine is similar. He spends 20 minutes addressing the gathering and moves on to Uthiramerur before reaching Kanchipuram at around 7 pm. He has two more stops to make.

At Kanchipuram, a traditional centre for handloom weaving and silk, he recalls the DMK founder’s contribution to the cause of weavers and the important role his own father, Karunanidhi, played in supporting the cause of handloom weavers.

The crowd cheers loudly, amplified by the orchestrated speakers placed strategically. He introduces the DMK candidate, CVMP Ezhilarasan, the grandson of a compatriot of Anna.

Referring to the emergence of the Kanchipuram district as a major industrial hub during the previous DMK regime, Stalin points out that it was the DMK that had originally planned a silk industry park here. But the AIADMK had delayed it; he points out.

No major industrial investments have happened in the past five years, says Stalin.

The DMK will encourage investments with industry-friendly measures like speedy clearances for projects and for the traditional businesses, a cooperative bank to support weavers.

The DMK will also support the SME sector and tiny industries by tackling major issues within three months of coming to power; he says before the convoy leaves for the next location.