On March 22, three men stopped in the busy departure hall of Brussels’ Zaventem International Airport and detonated two bombs in quick succession. An hour later, another bomb ripped through the Maelbeek metro station, just blocks away from the headquarters of the European Commission. In total, the attacks killed more than 30 people and injured at least 200. And while the past year has seen similar attacks in cities around the world—including Paris, Ankara, and Ouagadougou—the Brussels bombings were unique in what they exposed: the vulnerabilities of public transit centers.

Security has been swiftly bulked up: Domestically, subways and airports around the country have seen a spike in police presence—in the case of airports, that means more police patrols in the area where passengers congregate before passing TSA screening. Cities in Europe—such as Paris, which suffered its own terrorist attacks last November, and London—have seen similar boosts in security, including increased police patrols in city centers and airports and heightened scrutiny at border crossings. But while this quick-response and often temporary measures are important and expected, some call for more systematic changes, including screenings outside of the main terminal buildings.

Matthew Finn, managing director of AUGMENTIQ, a London-based consultancy that specializes in aviation and border security, says that it is true that the Brussels attacks have pointed to holes in current security practices around the world. “The attack on Brussels’ airport has created greater awareness—and serves as a painful reminder—that the landside, the public area of the airport, remains vulnerable to attack,” he tells Traveler.

There is no indication that the TSA or local police will shortly institute pre-terminal checks at American airports. While the TSA could not share particular plans for security reasons, a spokesperson who talked to Traveler on condition of anonymity did confirm that the TSA is deploying additional security to major airports and highlighted its Visible Intermodal Prevention and Response (VIPR) teams: inter-departmental personnel with a range of specialties, including the careful observation of behavioral patterns through camera surveillance, and teams that work across federal, state, and local law enforcement. According to the 9/11 Commission Act of 2007, such teams are authorized to “augment the security of any mode of transportation at any location within the United States.”
But in most airports, anyone can enter the departure area posing as a traveler.

In many airports in Africa, the Middle East, and Southeast Asia, passengers have to show identification, pass through metal detectors, and have their bags checked when entering the airport. From security footage of the three suspected Brussels bombers pushing luggage carts, it would appear they were able to do just that. But it is more difficult to do this at certain airports around the world. After an IED explosion at Jomo Kenyatta International Airport in Nairobi, Kenya, authorities instituted a system of security checks on cars entering the airport, a full kilometer away from the terminal building—a move that bumped the recommended arrival time before departure from two to three hours. While there have not been further attacks at the airport, according to intelligence reports, it continues to be a target for Somali al-Shabaab militants. 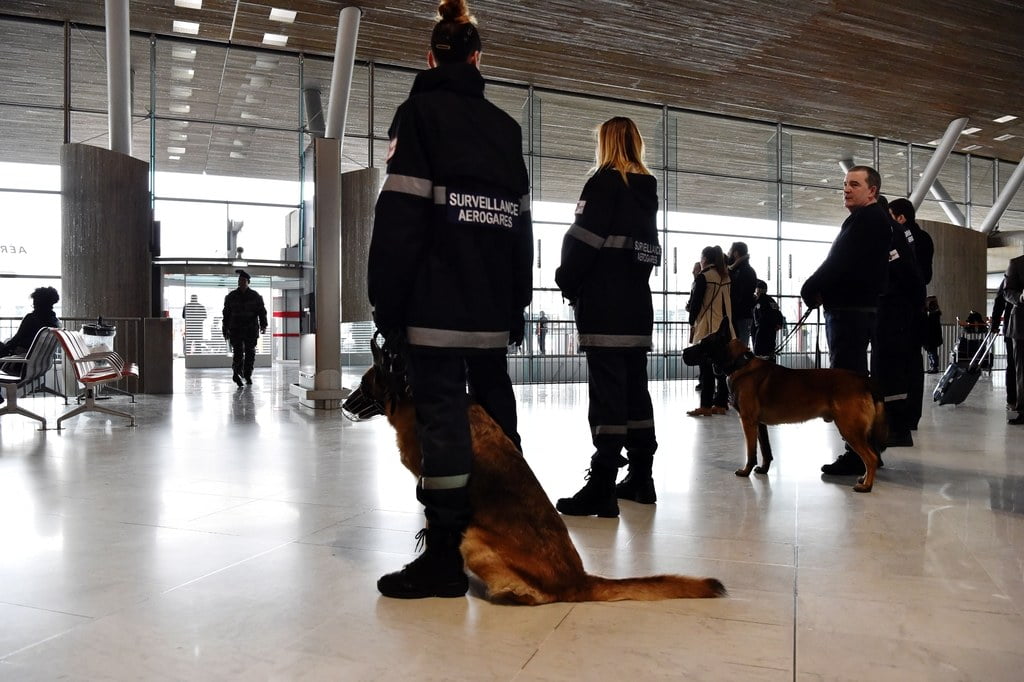 Increased security in the wake of tragedy is not limited to airports. After a car bomb exploded at the JW Marriott in Jakarta in 2003, hotel security teams all over the city started checking cars entering the grounds, and visitors and guests alike had to walk through metal detectors to enter the building. But six years later, double suicide bombings by the same al-Qaeda affiliate, Jemaah Islamiyah, rocked the JW Marriott again, along with the Ritz-Carlton.

Visible security is undoubtedly important and may, at times, act as a deterrent for would-be terrorists. The decline in airplane hijackings—first after major changes in the early 1970s and again when gate security increased post-9/11—is a testament to that. But it is also true that no matter how much policing is involved, how many metal detectors you have to walk through, how many times you have to put your bags through an X-ray before you get into an airport or onto a train or into a hotel, there will always be more targets. “Simply introducing another layer of security screening to enter the terminal building only moves the problem—It does not solve it,” says Finn. “If the terrorists’ goal is to cause maximum loss of life and mass casualties, the target will be the area with the greatest number of people—whether they’re waiting to go through security inside the terminal building or waiting to enter the airport. Outside the terminal building.”

Subway and local train systems pose many of the same obstacles for security professionals. Their efficacy relies on efficiency: People want to get in and out as quickly as possible. But in both Delhi and Mumbai, lines often stretch out of the stations as people patiently wait to put their bags through an X-ray machine and walk through a metal detector. Do citizens accept it because it’s always been that way? Or is the memory of the 2006 and 2008 attacks in Mumbai fresh enough that they are willing to take on the inconvenience, as long as it translates to safety? Programs like Global Entry and TSA PreCheck in the U.S. have been employed to increase the number of “known travelers” (and speed up the process when security risks are low). Still, recent news of a flight attendant who was part of TSA’s Known Crewmember program—found with 70 pounds of cocaine in her carry-on—shows that no system is flawless.

Subways hold mass appeal because of their convenience, and it seems unlikely that the Delhi model could be replicated in other large public transit systems. Delhi has a daily ridership of about 2.3 million passengers, and the X-ray machines and metal detectors already act as a bottleneck to service. (New York, by comparison, has a daily ridership of about 6 million.) “Airport-style security in a train station or metro would be extremely cumbersome, given the much larger number of passengers using metro systems daily,” Finn says. Instead, he sees a different approach as a solution to metro security: “There are roles for other security layers, such as explosive detection canine units, real-time video analysis, behavioral analysis, and passive explosive trace detection systems.”

Instead of enhanced checkpoints, security experts like Finn take a more holistic approach to the problem. “Security improvements will come in the form of a multi-layered approach to identifying, managing, and responding to risk and ensuring any new security measures are sufficiently flexible to be unpredictable and capable of being scaled up or down according to changes in the threat landscape,” he says. And that “threat landscape” shows no signs of disappearing. But is that sense of helplessness, or the recent U.S. State Department travel alert issued for all of Europe, reason enough to stay hermetically sealed at home? Even Finn, who faces the evolving threats every day as part of his job, thinks not. “Travelers should consider those warnings but should not allow their lives to be dictated by fear,” he says. “Aviation is a force for good. It fosters greater understanding, promotes the exchange of ideas, and enables billions of people to explore the world every year.”